Discover Torre Truglia, the symbol of Sperlonga.
It stands up on a rock between the sea and the old village.

The Romans had built there a huge lighthouse that allowed people to communicate from one coast to another.
Today it is considered one of the best places for couples to get married.

Want to learn more about the history of Torre Truglia?
Well, keep reading.
Or, just Book your wine tour and you’ll hear this story while walking in Sperlonga.

What does the word “Truglia” means?

“Truglia” probably comes from Truglio, and this one in turn from the Latin Trullus, (the Greeks would say Trullo). This term has been used in 700 A.D. by the latin monk Paolo Diacono to mean a dome. Apparently this was the name given to the roman building with a circular base placed in Sperlonga. It may later be turned into Truglio, as it happened for the Tiberian villa in Capri with the same name, probably under the influence of the Bourbon dialect.
The feminine of the adjective would have been chosen to match the noun “tower” (which has a feminine gender in Italian, with an “a” instead of the of “o”), perhaps when the fortress was built in the 14th century.

The first construction of which we have news dates back to the Roman Empire.
In 2014 researchers from L’Orientale University in Naples have located the very visible remains of a Roman building below the walls of the current tower (if you look at the sea they appear on the right slope of the hill).

The base, which consists of opus reticolatum walls with a circular plan, suggests that the Roman building was placed a little further behind the current one. The walls, according to the archaeologists, witness at least two building stages: the first one contemporary of the imperial mansion; the second, with the reuse of some previous material, presumably dating back to Late Antiquity.

It could be the ancient lighthouse, i.e. part of the alert system that has been often mentioned by the ancient sources talking right about the Emperor Tiberius. A sea reference point then, that Tiberius would have used over time, also when he retired away to Capri during the famous phases of the removal of Seianus. From the peak of Capri Tiberius observed in real time the signals that kept him up to date about the arrest and the death sentence for the ambitious soldier who had become the Emperor’s friend and influential confidant but who, according to some sources, aspired to succeed him, and had gone out of favour because of that. The lighthouse in Sperlonga would have been the key of communication in those fateful times.

Although according to some texts the building of the Truglia Tower would date back to the first half of the 16th century on the remains of a previuos lookout, it is likely that it was built at the end of the 14th century, when Carduccio Gattola was lord of the manor in Sperlonga (Giulio Scalfati, “Splong – Sperlonga” Caramanica editore, 1997).
Ladislao D’Angiò Durazzo – Giovanna I Queen of Naples’ nephew – in 1400 forced Onorato Caetani, count of Fondi, and his heir Giacobella, to subjugation.

Sperlonga was a bridge between the territories of Gaeta and Fondi. Its possession therefore in the hands of Onorato and Giacobella had been, and still was, dangerous for the safety of the two territories.

The surrender pacts of Giacobella, thus, stated what we would call today the “demilitarisation” of Sperlonga. And such very pacts convince us that it is not without reason that Truglia Tower at that time had more the aspect of a real fortress then that of a fire tower.

We may just notice how different it is from the close Capovento Tower. This one  certainly dates back to the 16th century because its circular shape had a precise function since gunpowder had been discovered.

The bullets of the artilleries could very rarely strike a Tower with an impact angle that could allow the penetration of the bullet. More often, or almost always, the bullet diverted sideways from the round wall of the tower that it had reached, even if only slightly, to an acute angle.

Truglia Tower instead is not only square, it is, moreover, sustained by four mighty buttresses that lie on the rocky promontory a few meters lower from the support base of the tower.

The four buttresses were meant to prevent the enemies’ siege ladder leaning. Ladders need a vertical wall to lean against and therefore the four oblique walls of the buttresses reduced the vulnerable space of the boundaries of the tower.

As the bases of these buttresses were placed lower from the support base of the tower, in turn, the enemies couldn’t go around the tower, and run to help those who were succeeding in the assault.

Above the tower there is also another building. A “redoubt” for the survived fighters that wanted to keep fighting back.

This shows that it was bound to remain armed, i.e. inhabited by soldiers even after the enemies had landed. This didn’t happen in the watchtowers, which had to be abandoned after having served their function.

Sperlonga could not be conquered without conquering the Truglia fortress before and Ladislao knew it well as he had not been able to attack Fondi from this place.

The Truglia fortress had then completed the defence plan that Riccardo Dell’Aquila had created three centuries before, when he had directed the fortifications in Sperlonga so that the road Flacca was closed to anyone who came from Gaeta.

Therefore other two towers protected the coast of Sperlonga; the one called Capovento and that of Citarola (Cetus is the latin for“tuna”), whose name confirms the existence of a small tunny-fishing net system at that time.

For two centuries then a new Asian bloodline, the Turks, had undertaken the reunification of the different Islamist states spread over Asia Minor, the Balkans and North Africa. They competed for the free navigation of the Mediterranean and its commercial exchanges, with the states of the Italian peninsula, Venice above all.
The fief had to be defended with fortifications and these one had to take into account that the threat could first of all come from the sea. The introduction of firearms had made the square towers vulnerables. They were exposed to the impact of artillery bullets much more than the round towers. That’s why they had to be built from scratch.

The Spanish monarchy adopted a strategic and defensive system that connected the coast from end to end by a chain of fortified sites from each one of which two of them were visible, to the right and to the left. By warning the troops quartered at the back at the right moment they could so prevent the landing.
In 1532 the Truglia Tower was then rebuilt. But hardly two years later, in August 1534 Sperlonga underwent the invasion of the Ottoman corsair Barbarossa, called Khair Ad-Dìn, who had landed to kidnap the beautiful Giulia Gonzaga in Fondi. The tower was destroyed.

17th CENTURY – THE TURKS ARE BACK

While rebuilt in 1611, on 4 July 1623 Truglia Tower was demolished by a new Turkish invasion. The village was sacked, the houses were burnt and many of the inhabitants were killed.

Story goes that the invasion was due to the betrayal of Such a Genovese from Gaeta, who had been kidnapped from the Turks, while he was transporting some eels to Rome the day before. In exchange to his freedom he would bring them to Sperlonga. Few days later, the traitor, out of curiosity, went on board one of the Galleys which had reached Gaeta, where he found one of the Turks who had sacked Sperlonga. When this one saw him, he started shouting: “Here is the one who betrayed Sperlonga!” Once got made, Genovese went on the run. He was since then called Stamurat, which is the arabic for “renegade”.

18th-19th CENTURY – LOOK-OUT, JAIL AND THEN CENTER OF THE GUARDIA DI FINANZA

Truglia Tower flourished again in the 18th century and provided a safe look-out for the whole coast.

After the Italian unification in 1862, the 11th Infantry regiment division (from Piedmont) garrisoned Sperlonga under Lieutenant Pavero. Along the beach between Sperlonga and Terracina a Neapolitan soldier had been hiding for almost two years. Giuseppe De Bonis, escaped from Gaeta, was waiting and hoping the return of the King. Pavero set him a trap and captured him. The Neapolitan walked in chains, among the armed soldiers, to Sperlonga and was imprisoned in Truglia Tower.
On 9 April 1862 the Neapolitan soldier was shot to the back by a bunch of Piedmontese in Campo delle Monache part.
This is the only firing squad that ever occurred in Sperlonga and the only accident that ever happened between Neapolitans and Piedmontese in this village.

Today many marriage ceremonies take place on the terrace of the tower. 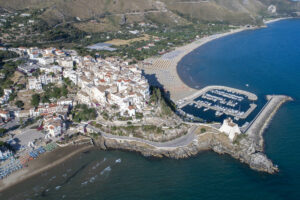 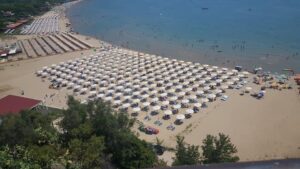 Facebook Youtube Instagram
Amyclae Experience is a communication service for locally based companies - © 2021 - By Irene Chinappi - P.IVA 03131400594 Promoter and event consultant @ Az. Ag. Monti Cecubi.
At Amyclae Experience we believe that the real success of a food and wine communication project is all about the experience that people live around a product. Is there anything more powerful than a wonderful memory?
Partners
Az. Monti Cecubi
Sperlonga Pescaturismo
Ristorante Tirreno
A Casa di Marco
Il Nibbio
Book
Call